Disney held their Destination-D event in November. It coincidentally occurred right after the International Association of Amusement Parks and Attractions (IAAPA), a seminal trade industry event for theme park operators. Due to the timing of the two events, Disney executives revealed a vast amount of details about upcoming park events. Much of what we discuss here is from one of the two events. The biggest news is, of course, Star Wars Land, the upcoming themed land that will instantly become the most popular one in the world. While we’ve known for a while that Star Wars Land would feature a pair of major attractions, we didn’t know their names until now.

The Millennium Falcon ride, Disney’s self-proclaimed E-ticket attraction, is Millennium Falcon: Smuggler’s Run. Park officials discussed the unique nature of the attraction, which will operate similarly to Mission: Space in that all members of the ride will have assigned tasks. Failure is apparently possible on Smuggler’s Run, meaning that a few bad “players” could cause you to get pinched by the cops. The open-ended nature of the attraction is tantalizing for this reason. 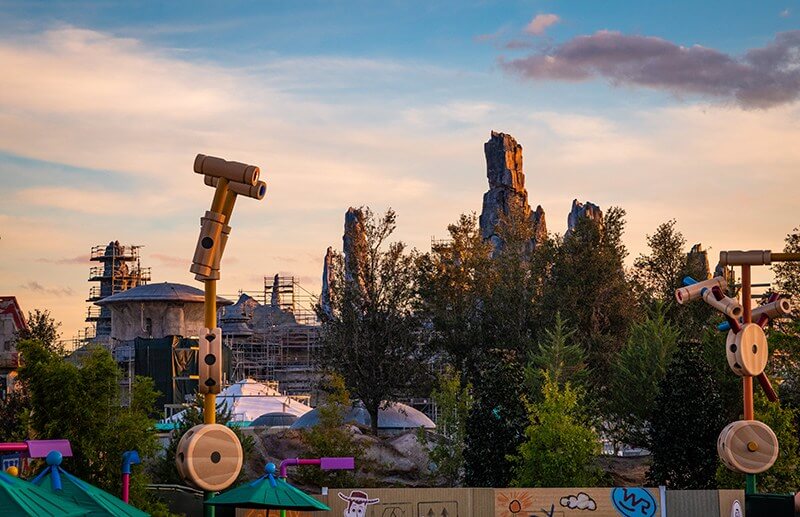 The other ride at Star Wars: Galaxy’s Edge is officially Star Wars: Rise of the Resistance. It’s the First Order attraction with trackless vehicles. Thanks to this groundbreaking technology, you can move everywhere on the path. According to the New York Times, 50 audio-animatronic Stormtroopers are part of the ride, and a famous Star Wars villain might make an appearance, too.

Disney displayed some images of Star Wars Hotel, too. The resort won’t debut at the same time as the themed land, and only Walt Disney World will get one. Disneyland will open its Star Wars Land first but has no plans of constructing an accompanying hotel. We learned that the property near Disney’s Hollywood Studios will use shuttles in a novel capacity. The idea of Star Wars Hotel is that the instant you check in, your immersive, interactive Star Wars experience begins. To foster that illusion, the published images of the hotel suggest that shuttles will transport guests to and from Hollywood Studios. While Disney didn’t confirm it yet, leaked rumors suggest that the shuttles will not have viewing windows. Instead, they’ll block exterior views so that guests see Star Wars-related visuals instead of Orlando’s skyline.

The images Disney showed of Star Wars Hotel rooms are similarly immersive. The “windows” in the hotel are digital displays. They provide views of the solar system you’re visiting while vacationing on Batuu. So, your room view is of the Outer Rim Territories, the proverbial Galaxy’s Edge.

While the news isn’t shocking, we did get a Disney Skyliner update during Destination-D. Disney even brought a Skyliner gondola to the exhibition for guests to evaluate. We also learned that, as expected, the Skyliner will debut in the fall of 2019. Its timeline still lines up with the debut of Galaxy’s Edge, which makes sense. Disney wants the Skyliner operational before Star Wars Land opens and overwhelms current park transportation options. A reasonable expectation is for the Skyliner to open a bit ahead of Star Wars Land. That way, Disney can verify that it’s working smoothly before the massive influx of park traffic. The one oddity about the Skyliner is something that Disney has now confirmed.

The gondolas will NOT have air conditioning. Instead, Imagineers have designed high-air ventilation systems that they believe will keep the vehicles the proper temperature throughout the ride. I suspect that Imagineers will have a lot of nervous days verifying that gondolas are comfortable in the hot Florida weather.

From this point forward, Whirlpool is the official appliance of Disney theme parks. The sponsorship may seem like an odd one on the surface. For DVC members, however, it’s a huge benefit. With Whirlpool in place, DVC resorts will get a fresh line of new appliances. Whirlpool products like refrigerators, washers/dryers, dishwashers, and ovens will go into many DVC rooms, especially the suites.

DVC members are the huge winners in this agreement. With Whirlpool’s brands like Maytag and KitchenAid in place, DVC hotel rooms will become that much better than standard bookings.

Park officials confirmed several upcoming ticket events at the various theme parks. In Anaheim, Disneyland After Dark will return in 2019. The Happiest Place on Earth will host two events.

The first Disneyland After Dark event is Sweethearts’ Nite on February 7, 2019. This event is exactly what it sounds like, a date night at Disneyland. For $99 per person, guests get the run of Disneyland for four hours that are otherwise closed to the public. Many of Disney’s favorite couples will hold character greetings during this event, too.

The other event is 90’s Nite. It’s a celebration of the 1990s, specifically as the decade applied to Disney entertainment. Films from that decade as well as The Disney Afternoon’s programming are the backbone of the event. It will be held on March 7, 2019.

Walt Disney World fans are in luck, too. In fact, they have a chance to celebrate even sooner. Disney After Hours will expand to two new parks. Disney’s Hollywood Studios will host this ticketed event on December 8th, 15th, and 22nd this year. In 2019, it will also be available to guests on January 5th, 12th, and 19th and then on February 2nd, 9th, and 16th.

In March, Hollywood Studios will hold the event on every Saturday and then again on April 6th and 13th. For $125 per person, guests will have the run of Toy Story Land at a time when it’s otherwise closed to the public.

The same is true at Disney’s Animal Kingdom. Pandora – The World of Avatar still has massive wait-times for its two attractions. You can skip the lines by attending Disney After Hours on December 4th, 12th, and 18th. In 2019, 14 more dates available. Those are: 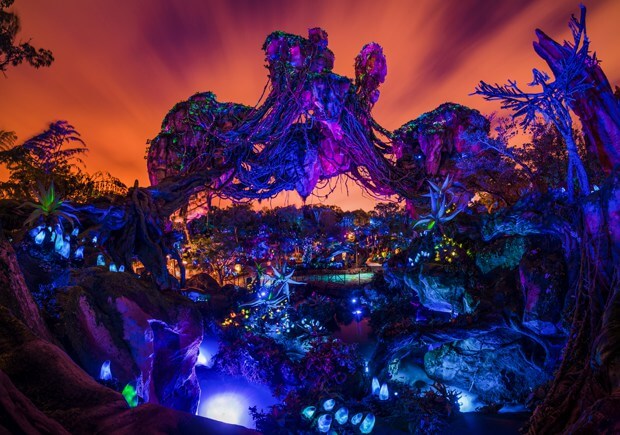 Assuming that you don’t mind the price, these after-hours ticketed events are wonderful and highly recommended.

DVC Members Have a Different Option

Card-carrying DVC members can save themselves some money, though. Rather than paying for a ticketed event, they can attend the free Moonlight Magic after-hours celebrations instead. Disney just confirmed that Moonlight Magic will return in 2019.

Disney will host a dozen events in 2019 at five theme parks and a water park. Disneyland is home to the first event on January 31, 2019. Magic Kingdom gets the next two on February 5th and 12th. Then, the festivities switch to Hollywood Studios on March 20th and 27th.

Epcot receives a pair of Moonlight Magic nights on May 13th and May 20th. The other theme park nights are at Animal Kingdom on July 18th, August 8th, and August 22nd. The popular water park nights are September 18th and October 16th at Typhoon Lagoon. With so many options, DVC members should be able to attend at least one 2019 Moonlight Magic event.

Here’s a strange Disney news item. Let’s talk character greetings for a moment. You know how much you love interacting with your favorite Disney characters while a PhotoPass photographer takes pictures of the proceedings? Well, that’s about to change.

Disney has turned over the reins to robots. Yes, at nine different character spots across Walt Disney World, automated kiosks will capture images of the interpersonal interactions. Disney has phased out human cast members at these locations in favor of automation. They had previously tested this during a limited trial, and the results were by all accounts disastrous.

After doing a lot of tweaking, park officials have expressed confidence that automation is the future of park photo ops. They’ll demonstrate this confidence by introducing the automated camera system early in 2019. Disney believes that guests will prefer the wealth of options available via automation. A video system can record every millisecond of an encounter, capturing the best moments. Human photographers need a bit of luck to do the same. Still, Disney is hedging its bets by maintaining status quo at more than 100 photo ops just in case.

Let’s close this month’s news with the most important information for DVC members. We learned more details about three different upcoming resorts. Let’s start with the non-DVC one. Technically, Disney’s Coronado Springs Resort isn’t new; part of it sure is, though.

Gran Destino Tower is a 15-story tower addition to the existing Coronado Springs campus. Imagineers have constructed it as the centerpiece of the resort, no small feat for a property that’s more than 21 years old. It will add 545 rooms to Coronado Springs’ inventory, 50 of which are suites. The new tower is currently scheduled to open next July, and Disney started taking reservations in late November. Skipping to the end of the page, Disney also released the name of its next DVC resort…well, its next resort AFTER the next one. The 16th DVC resort was previously known only as a nature-themed property. We now know that its Reflections – A Disney Lakeside Lodge, hosted on Bay Lake on the former land of Disney’s River Country.

This hotel will be close to Disney’s Fort Wilderness Lodge & Campground and will include 900 rooms. The ETA for the opening of Reflections is currently 2022, so it’s not going to arrive in time for Walt Disney World’s 50th anniversary.

The NEXT DVC resort is Disney’s Riviera Resort. We learned a bit more about it this month, too. Disney showed concept artwork for the 15th DVC property. The images highlight a gorgeous pool that will recreate the sensation of lounging by the pool at the actual Riviera. The resort has a pair of pools and 300 DVC-exclusive rooms. The showstopper at Riviera Resort is something that will warm the hearts of DVC members. We all love watching the fireworks display from the top of Bay Lake Tower at Disney’s Contemporary Resort, right? Riviera will offer a similar amenity, with a rooftop view of nighttime fireworks exhibitions at both Epcot and Hollywood Studios.

Speaking of which, the final news tidbit is that we learned the impending fireworks schedule at these two parks. IllumiNations: Reflections of Earth gets phased out in 2019 in favor of Epcot Forever, a short-term exhibition that celebrates the history of the park. Classic Epcot songs will provide the soundtrack for this show, which will include new technology called “special effects kites.” In 2020, the true IllumiNations replacement will arrive. Details are still sketchy on this one, but we know that the Riviera will feature an incredible view of the new display.