With 15 resorts available in the Disney Vacation Club (DVC) lineup, you may feel overwhelmed with choice. You want to spend your hard-earned money on the best possible DVC resort. After all, you’ll spend countless days there over the next few decades.

I want to aid you with your decision-making. So, I’ve started this series to evaluate the pros and cons of every resort. Hopefully, it will help you choose the perfect resort for your family’s short- and long-term needs. Today, we’re taking a look at the property where I’ve stayed the most. Here are five reasons to own at Bay Lake Tower and two reasons to look elsewhere.

The Negatives of Owning at Bay Lake Tower:

Let’s get this out of the way first. The rooms at Bay Lake Tower at Disney’s Contemporary Resort aren’t large. In fact, the studios were the smallest in the entire DVC lineup before Copper Creek Villas & Cabins at Disney’s Wilderness Lodge opened. The rooms are only 339 square feet, one whopping square foot more than Copper Creek. 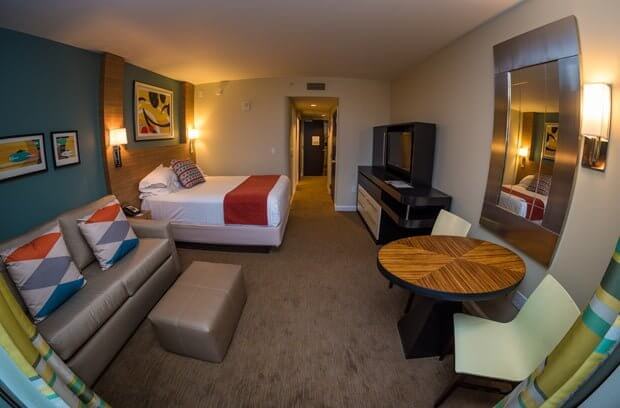 The positive about the rooms is that Disney designed them well. The efficiency of the studios makes them feel larger than they are. But small is small. Also, the deficiency in room size continues through the suites. A one-bedroom is a modest 803 square feet while a two-bedroom is only 1,152 square feet. Guests who like to stretch out in a hotel room won’t love Bay Lake Tower.

This negative is in the eye of the beholder, but I read it mentioned a lot. Some vacationers feel that the Contemporary is the worst-themed of all official Walt Disney World resorts. The pervasive belief is that most Disney hotels include a dazzling, meticulous theme that differentiates each one from the rest. For example, guests at Disney’s Animal Kingdom Lodge will never wonder where they’re staying. The view of the animals in the surrounding savannah spells that out clearly. Similarly, Disney’s Polynesian Village Resort and both Wilderness Lodge properties distinguish themselves as conventional vacations of yore. Whether a DVC member prefers an island getaway or a trip to a rustic national park region, the hotels recreate that environment.

At the Contemporary, the theme is somewhat vague, at least to non-Disney fans. Sure, some of us know about Mary Blair’s mural and its five-legged goat. Many are aware that it joins the Polynesian as one of the first of two official Disney hotels in the entire world. And nobody will miss the monorail zooming through the middle of the A-Frame building.

For some folks, that’s just not enough. I respect that opinion, even though I disagree with it. To me, the Contemporary will always be the place that opened day and date with Walt Disney World. And nothing makes me feel like I’m at home at Disney like when I see the monorail for the first time.

The Positives of Owning at Bay Lake Tower:

The other four positives that I list here are all significant, but let’s be honest. The primary selling point of Bay Lake Tower is its location. The Contemporary has always stood out as the closest hotel to Magic Kingdom. Now that it’s open, Bay Lake Tower, the adjoining property, is actually a bit closer. When you exit the lobby of the Contemporary, you’re about 1,000 steps away from Magic Kingdom. At least, that’s what my Fitbit tells me. The distance from Bay Lake Tower is only 800 steps. You’re a brisk walk away from the Most Magical Place on Earth, and there’s just no competing with that.

Each time you exit Bay Lake Tower, you’re 10 minutes and a Magic Band tap away from Main Street, U.S.A. It’s an intoxicating, addictive amenity. While this hotel isn’t the one that I love the most in the DVC lineup, we keep picking it due to that proximity. And my wife has informed me in no uncertain terms that this will be our next add-on contract. The location is the reason why.

Three DVC properties qualify as monorail resorts. While prices also fluctuate, usually in an upward motion, the trend is that The Villas at Disney’s Grand Floridian Resort & Spa costs the most per point. Disney’s Polynesian Villas & Bungalows has the second-highest prices, while Bay Lake Tower is the cheapest.

At the time of publication, most Grand Floridian contracts listed in the $170s per point. Sure, you’ll occasionally find a lower price, especially on a large contract, but that’s a fair baseline. At the Polynesian, pricing variation is higher. However, many contracts are in the range of the $150s/$160s.

Bay Lake Tower currently lists plenty of contracts in the $130s. Now, the price could be much higher when you read this, as DVC prices are continually increasing due to the popularity of the program. Even so, Bay Lake Tower seems to skew a bit lower than its companions on the monorail. You’ll find the most value among the monorail resorts here.

Speaking of which, the monorail has stood the test of time as one of the best ways to traverse Walt Disney World. The resorts on the monorail line are never more than a few stops away from Magic Kingdom.

Even better, you can switch monorails at the Transportation and Ticket Center. Then, you can take a direct monorail to Epcot. Thanks to the monorail system, you have sure transportation to the two most famous theme parks at Walt Disney World. With the introduction of the Disney Skyliner, other resorts now have their own transportation options. As an example, Disney’s Riviera Resort can claim the same convenience to Disney’s Hollywood Studios and Epcot. However, the monorail resorts will always maintain a certain cachet among DVC members and Disney fans in general.

Many DVC resorts come with special bookings. You may select a Room Type that guarantees a view or even an amenity in some cases. Some of the resorts feature especially intriguing options. Even among them, I would place Bay Lake Tower at or near the top of the list.

At this resort, you may book either the Lake View or Theme Park View room type. The former term is self-explanatory, but it comes with a couple of wonderful benefits. Your room will look out over Bay Lake and sometimes include a pool view as well. I find this view enticing enough that I rarely stay in the standard room type. Also, a rainy day over Bay Lake has proven oddly soothing to me over the years. The Theme Park View is the most desirable room type at Bay Lake Tower. By booking this Room Type, you’re guaranteed to have a view of Magic Kingdom from your room. Generally, you’ll have a great look at Tomorrowland, especially Space Mountain and Astro Orbiter. Sometimes, you’ll get lucky and get a Cinderella Castle view as well, although you’ll need binoculars for that one.

The best part of Theme Park View is that you can watch the fireworks from your hotel room. Disney thoughtfully pipes the show’s audio through one of the channels on the television. We just watched Happily Ever After from our room the other day, and it was truly magical.

Bay Lake Tower’s amenities are sparse. The pool is lovely, and the kid’s playroom on the ground floor works well as an emergency babysitter. Other than that, the amenities are at the Contemporary, which is fine.

On this floor, you’ll find the security entry point for the monorail. Once you’re cleared, you can take the monorail straight to Magic Kingdom and won’t need to perform additional security checks. On the other side of the wall for this area is Contempo Café, a popular Quick Service restaurant with a phenomenal view of the monorail.

Right beside Contempo Café is Chef Mickey’s, one of the hardest Advanced Dining Reservations to book at Walt Disney World. It’s a character meal with Disney’s Fab Five, so kids adore it. Somehow, this place isn’t the best restaurant at the Contemporary, though. It might not even be in the top two.

The hotel lobby is where you’ll discover The Wave… of American Flavors, a place that foodies adore. While rumors persist of a theme change, this place has satisfied guests for years with its haute cuisine. However, the star of the Contemporary is a place you’ll access from the second floor.

An elevator here will take you to California Grill, the top floor Signature Dining experience that comes with an inimitable view of Magic Kingdom. It’s one of the most unique places to watch Happily Ever After, although card-carrying DVC members can do the same at Top of the World Lounge at Bay Lake Tower. The food at California Grill is among the best at Walt Disney World, so you may prefer dinner with your show.

Finally, the shopping at the Contemporary is exquisite. The fourth floor features Bay View Gifts, one of the best and largest resort stores on the Disney campus. I always marvel at the selection here. I just picked up a jacket, some holiday decorations, and some dessert here. That’s a diverse amount of shopping.

Right beside Bay View Gifts is Fantasia, an open-ended memorabilia spot. High-priced Disney toys are available here, along with the cuddliest of Disney stuffed animals. Interestingly, the store has a sibling, Fantasia Market, which is where DVC members go to stock their cupboards for an extended stay. Don’t miss the DVC clothing behind the cash register, though!

Overall, the amenities at the Contemporary are arguably the best at Walt Disney World. I believe that only the other two monorail resorts are competitive in this category. The resort features at Bay Lake Tower are enough to justify a purchase here, and that’s before I factor in the proximity to Magic Kingdom’s entrance!