The fact that Disney even has this Disney Vacation Club (DVC) property is something of a miracle. During the early days of the project, the company faced stiff opposition from the locals. Hilton Head is an insular, upscale community where the South’s one-percenters hole up to golf and play tennis. It’s an eclectic community full of colorful characters, a modern version of Ernest Hemingway’s Key West.

When Disney announced in September of 1993 that they intended to build a resort on Hilton Head, they discovered that property owners in the area had laws in place against such projects. Disney planned a beachfront project in the Palmetto Dunes part of the city. They quickly learned that the Leamington neighborhood was a private community that had annexation rules in place. The DVC dream of beachfront rooms at Hilton Head died within months of its start.

Undeterred, Disney broke ground in December of 1994. They moved the site to Shelter Cove, a couple of miles away from the planned Palmetto Dunes neighborhood. They acquired three-and-a-half acres of nearby beachfront property to pair with the resort. Yes, the Hilton Head DVC property isn’t technically on the ocean. It’s a walk of a few minutes away; however, the Disney beach is totally private and exclusive to hotel guests. Had Disney not met resistance from the locals, this hotel would be located on the beach, though. Carolina pride is a thing in the South. The beauty of the mountains on one side of North and South Carolina are matched only by serenity of the oceanfront cities on the other end of both states. Disney infused their Hilton Head property with classic Carolina themes. They’re cottage-style villas, the kind that you’re just as likely to see at Atlantic Beach in North Carolina. The unexpected aspect is that this hotel isn’t a high-rise like you’d encounter at Myrtle Beach or even Savannah. City regulations prevent this sort of stacking design. Towers are unwelcome in a town where even the signs have height limitations. You won’t see any 15-story buildings that somehow all provide ocean views. To the contrary, you’ll rarely climb more than two flights of stairs during your visit to this DVC resort. The Hilton Head resort features more than 20 buildings, and it can feel somewhat spread out by Hilton Head standards. Compared to other DVC properties, however, this place is small and intimate.  As part of the Carolina vibe, Disney has themed the campus as a classic WWII-era hunting and fishing lodge.

You’ll appreciate the premise the most at the hotel lobby, which is called the Live Oak Lodge. Straight across from the check-in desk is a gathering room. Cast members host several daily, weekly, and monthly events here. Last time we were there, a gentleman regaled us with stories of Carolina’s most famous pirates and shipwrecks. The property is an environmental haven as well. While it’s not beachfront, part of it is by the water. You can walk across a pier to get a better view of the marsh. Some of these have this view as well. It’s indescribably tranquil.

Hilton Head Island is a weird one. The rules that you’ve learned about DVC seasons and maintenance fees don’t apply here. Premier Season at Hilton Head isn’t during the Christmas holiday. In fact, that’s one of the cheapest times to vacation here, as December 18th through December 31st is a part of Choice Season. The busy season at Hilton Head is during the spring and summer. To put this into perspective, a weeknight during Christmas week costs 10 points while a Friday or Saturday is 15 points. Since many people take three-day weekend trips to Hilton Head, you’ll always pay for a weekend night here.

During Adventure Season aka the offseason, a weekday costs only six (!) points. It’s the cheapest room in the DVC lineup. On weekend nights, the price doubles to 12 points. That seems reasonable, right?

During Dream and Premier Season, Friday and Saturday nights cost 23/27 points. That’s monorail resort pricing right there. In other words, those of you who plan to spend a summer vacation at this resort will never regret it. Please understand that the points chart isn’t working in your favor, though.

I quite like the design of these rooms, too. They’re segmented in a logical way that makes each living space feel comfortable. The one frustration is that you will get either Woodlands or Water View. There isn’t currently a booking option to select your favorite, which is unfortunate since the Water Views are great. Each hotel room comes with an unusually large outdoor seating area that pairs perfectly with a view of the marsh.

The low entry price may tempt you. Please understand that the maintenance fees could cause you to pay more over the life of your contract, though. This resort already has one of the top two annual maintenance fees among DVC properties. It goes up significantly whenever a hurricane causes property damage at the resort, which happened last year. Your maintenance fees go to such repairs. It’s something that’s entirely beyond your control. Compare the starter investment and the overall cost of ownership to see whether the maintenance fees fit well with your needs.

The amenity that matters to most is beachfront access. Obviously, this resort isn’t located on the beach. I understand that this is a sticking point for a lot of people. I was one of them before I stayed here. I didn’t love the idea of walking to and from the beach.

The resort does have shuttle service, but we found it redundant bordering on pointless. The walk to Disney’s private beach will take no more than 10 minutes for most guests. The sole sticking point is that you will have to navigate traffic at a couple of spots.

Some guests prefer to bike to and from the beach house area. You can either pack your own bike or rent one from Disney. Should you drive, you’ll discover that you can reach this place in less than three minutes when you catch the lights. It’s that close.

In other words, you’re not getting beachfront access like at Disney’s Vero Beach Resort. The inconvenience is trivial to me, but you may feel differently. Hilton Head is one of the few DVC-based cities that other legitimate, competing timeshare brands you may consider since they’re beachfront, but you’d be missing out on Disney theming by doing so. Who would want to do that?

The other amenities at the hotel are a bit Spartan by Disney standards. There isn’t a sit-down restaurant here, something that makes sense to anyone who has spent a lot of time in Hilton Head. There are excellent restaurants on seemingly every block, and nearby Charleston has Michelin Star-winning eateries.

Rather than compete at a considerable disadvantage, Disney only added a pair of grab-and-go places. Tide Me Over is a burger place close to the pool. I’ve ordered shaved ice in pop-up shacks that seemed to have better ambiances than here, but the cast members are wonderful, and the food is better than you’d expect. The beach house has a similar place called Signals, but it’s only open from April through the start of October. Disney hosts a couple of seasonal outdoor dinners onsite, too. You should count on the availability of those, though.

All roads at Hilton Head Island Resort seem to lead to the pool. Called The Big Dipper, it’s a massive 72,000-gallon pool. And it’s heated, something that’s rare among DVC properties. The Big Dipper is one of the primary hangout spots for hotel guests. There’s also a pool at the beach house that nobody ever seems to use, at least not when I’m there. 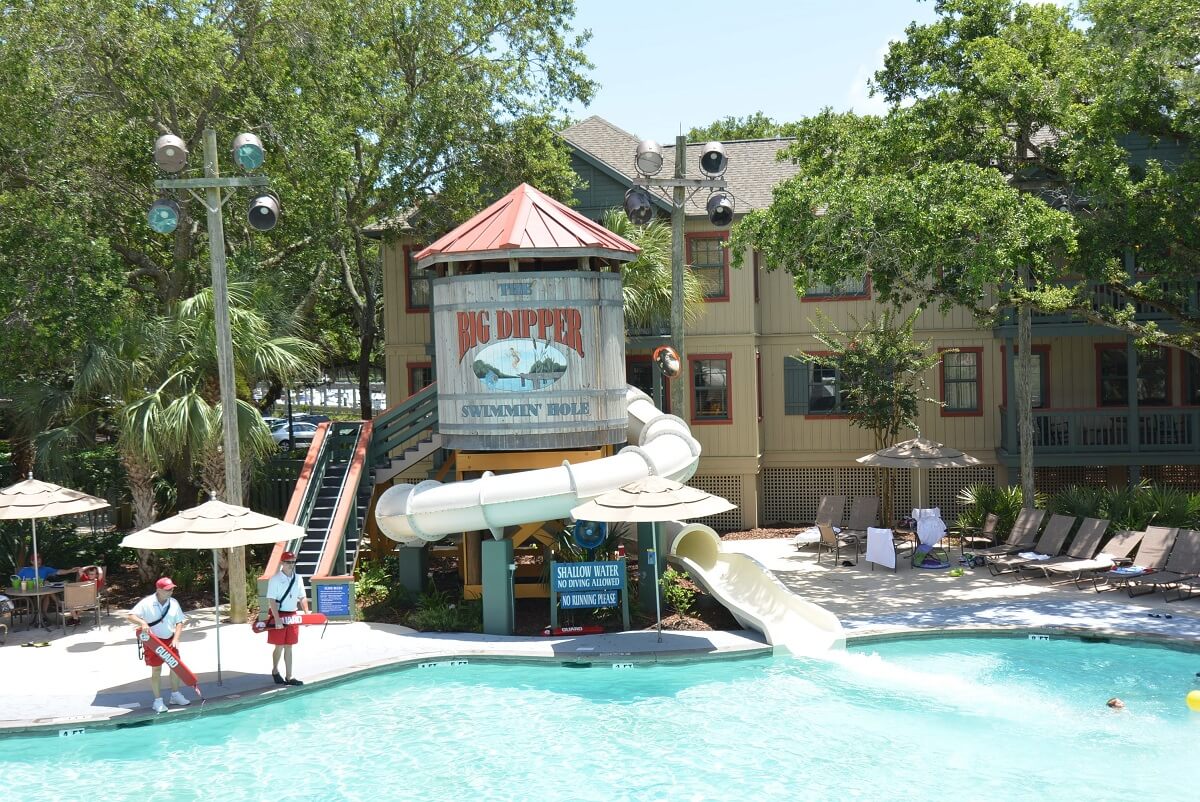 In the surrounding area, you’ll find plenty of outdoor games. You can play shuffleboard, ping pong, or basketball here. There’s even a campground where Disney hosts storytelling events. At Live Oak Lodge, you’ll find a pool table and a selection of Disney movies you can watch. There’s also a great general store called Broad Creek Mercantile Shop. I really like their DVC-specific merchandise. The hidden amenity of this place is the employment team. I’ve never met friendlier cast members. Within two minutes of my meeting the woman at the hotel lobby, she’d drawn me three maps and circled several points of interest. She even based it off of our answers to questions she asked. Yes, she is so skilled at her craft that she can spec out an entire vacation day for a stranger based on just a few responses. I was in awe of her professionalism.

The rest of the staff I’ve encountered is similarly invested in my satisfaction as a customer. Every DVC resort’s mantra is, “Welcome home!” It feels the most sincere at Hilton Head Island.

A final note about the amenities is that Hilton Head itself should count. This city is internationally renowned for its tennis clubs and golf courses. I once watched a 13-year-old girl play her first big tournament at Hilton Head. Her name was Venus Williams. And the golfing here could legitimately be described as the best set of courses in the South. Combined with the restaurants I’ve already mentioned and the shopping available in the area, Hilton Head is a spectacular vacation destination.

The pro of Disney’s Hilton Head Island Resort is the city of Hilton Head. Yes, that sounds ridiculous, but it’s true. When you buy here, you’re committing to visit one of the most prestigious beaches in the South regularly. Speaking as someone who does this, you’ll never regret it.

The people in charge of the upkeep of Hilton Head take their duties seriously and have done an admirable job. Hilton Head has somehow avoided the fate of becoming too touristy. You’ll love the soothing nature of beach visits here, and you’ll continuously feel in awe of the dedicated cast members on duty at the hotel. The two primary cons are significant. While you could save a great deal of money upfront by buying here, you’ll spend more over the lifetime of your contract. At the time of publication, the maintenance fees are the second-highest of any DVC resort. They could increase mightily at any point if a hurricane ever causes significant damage to the property, too. This concern falls into the category of “If.”

The other concern is in the category of “Always.” When you purchase at Hilton Head, you’ll never have the ability to book at a Disney theme park before the seven-month window. This aspect is less troubling to those of us who own multiple contracts. For the ones who will only have memberships at Hilton Head, it’s a potentially worrisome complication.

Only you can decide how much it impacts your vacation needs. Personally, I love Hilton Head and warmly recommend it to friends as one of the best vacation destinations in North America.